Herman arranges to meet Marilyn at the natural history museum. But he accidentally gets himself locked inside an Egyptian sarcophagus, whereupon a sleeping pill he swallowed earlier takes effect. A pair of museum curators open the box the next day and mistake the sleeping Herman for an ancient mummy. When Lily reads about their supposed scientific discovery in the newspaper, she goes to the museum and requests that the curators put Herman in a cab and send him home as soon as he wakes up. 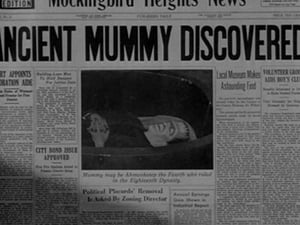